Here is a free course for layer command in AutoCAD

Using layers in AutoCAD is like using overlay drafting or transparencies on an overhead projector. 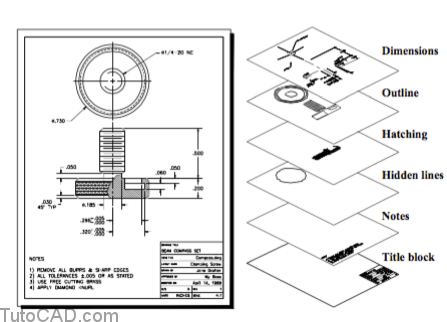 Why use layers in AutoCAD?

Place objects on different layers to control how objects appear on your screen and how they appear in plots.

It is easier to manage and edit your drawings later on when objects are placed on separate layers.

You can generate multiple plans from one drawing file by controlling which layers are visible (in plots) on each layout.

Display only the layers you need for the task at hand to make your screen less cluttered and improve your system performance. 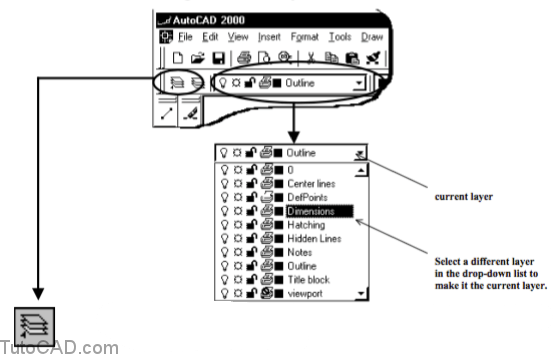 You can also use the first Object Properties toolbar button to Make Object’s Layer Current.

You can change status of four layer settings in the Layer drop-down list on the Object Properties toolbar.

Use the On & Off setting to control the display of objects on a layer.

Use the Locked & Unlocked setting to protect objects on layers that you do not want to accidentally modify in edit commands.

Use the Plot & No Plot setting to control whether or not objects will  appear in plots.

See also  How to use Layers & Other Dependent Symbols

Moving objects to a different layer 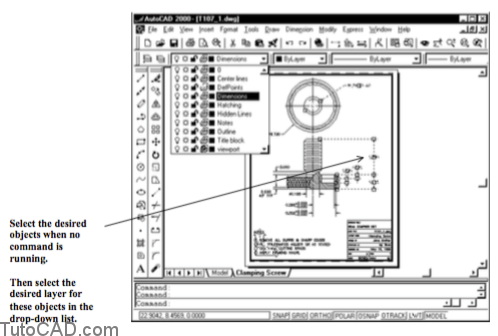 Step 1:  Launch AutoCAD (if it is not already running). Close all  open drawings (if there are drawings open).

Step 2: Open the T107_1.dwg drawing in your personal folder.

Step 3: Pick Tools + Run Script. Select your personal folder to Look in and select T107.scr as the script File name. Then pick the Open button to run this script. This sets drafting tools to match the behavior described in the exercises. 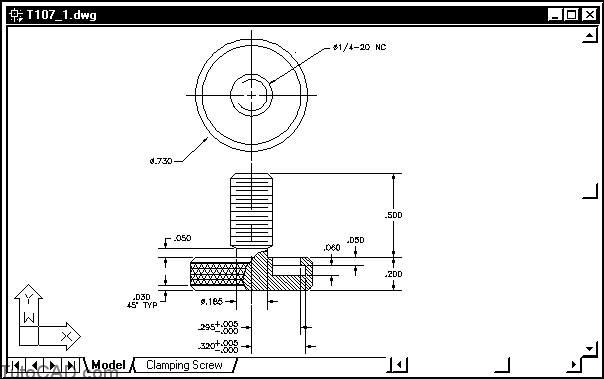 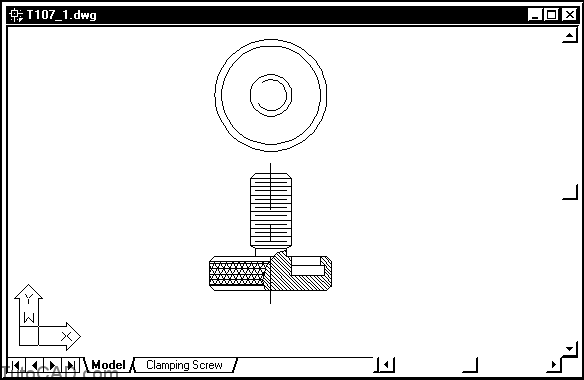 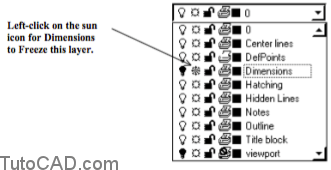 You Froze the Dimensions layer so now your drawing extents are smaller.
This time when you Zoomed to the extents you see objects on the other layers at a higher display magnification. 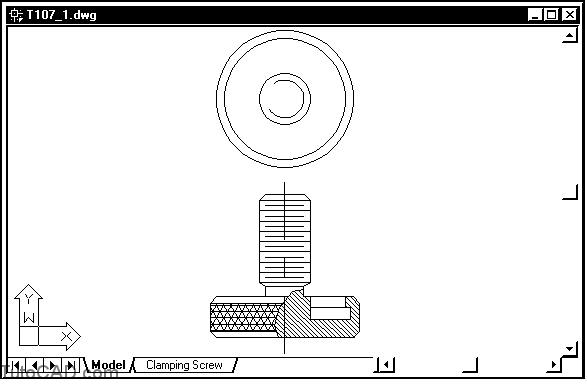 Step 8: Drop-down the Layer list and select Hidden Lines to make this the current layer. The list rolls up automatically. 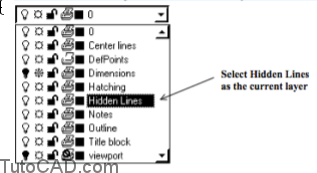 Step 9: Left-click on the OSNAP status bar button (if it is Off) to turn this drafting tool On.

Step 10: Pick Draw + Circle + Center,Radius. Hold your crosshairs over one of the existing CIRCLEs in the top view to invoke a Center osnap and left-click to use this as the center of the new CIRCLE. The enter 0.32 as the radius.

You changed the current layer from 0 (zero) to Hidden Lines.

Layer 0 has special properties that you will learn about later on when you work with blocks.

Step 11: Left-click on the first Object Property toolbar button (on left end) and when prompted to select an object click on the LINE near P1. 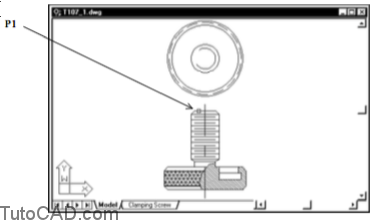 The Layer drop-down list should show Outline as the current layer.

Step 12: Pick Draw + Circle + Center,Diameter. Hold your crosshairs over one of the existing CIRCLEs in the top view to invoke a Center osnap and left-click to use this as the center of the new CIRCLE. Enter 0.73 as the diameter. 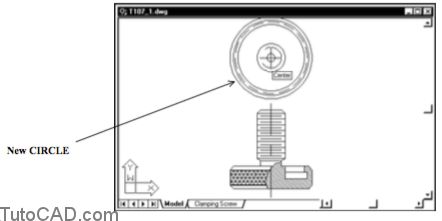 The new CIRLCE uses a white color (black on white background) and uses a continuous linetype because it is on the Outline layer.

See also  How to use MIRROR command

Step 13: Drop-down the Layer list and left-click on the lock icon for Outline to Lock this layer. Then roll up the list. 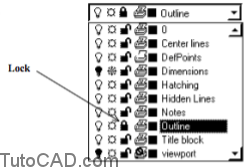 Step 14: Pick Edit + Clear and type ALL at the keyboard when AutoCAD prompts to select objects. Then press <enter> to complete Erase. The command line history is shown. 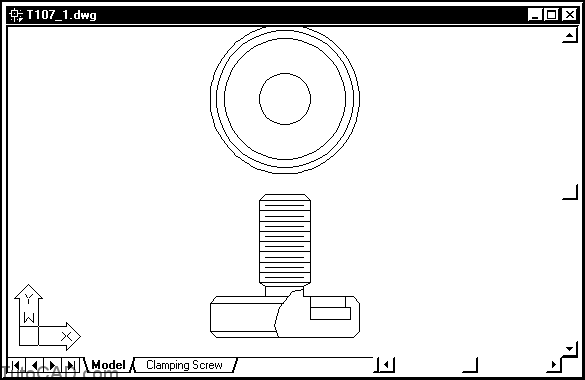 You locked the Outline layer so when you tried to Erase objects on this layer (with ALL other objects) these objects were not selected.

Step 15: Left-click on the Clamping Screw Layout to make this the current layout. Double-click outside the sheet near P1 to switch from the MODEL to the PAPER 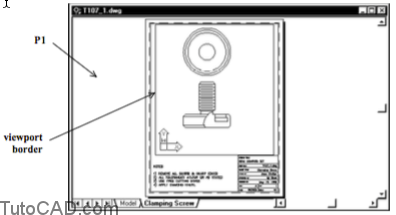 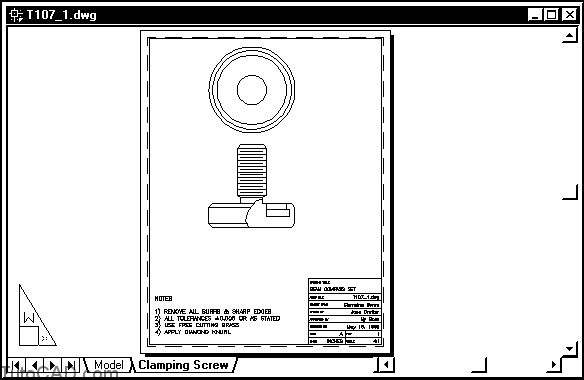 The VIEWPORT border will not be visible if the Viewport layer is Off  and you are on the PAPER (i.e. not in the MODEL).

Step 16: Right-click on the Clamping Screw layout tab to invoke a shortcut and select Page Setup. Select the Plot Device tab and then select HP LaserJet.pc3 (or equivalent) as the Name for the Plotter configuration. Then select the Layout Settings tab to continue (do NOT pick OK yet). 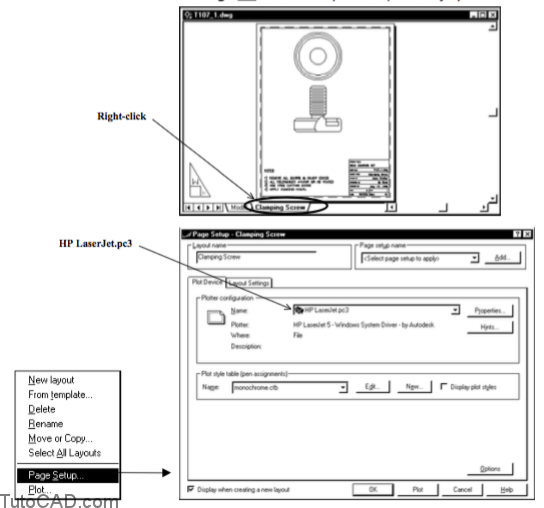 You must have a plot device selected to see a plot Preview.

Step 17: Verify that Drawing orientation is Portrait then pick OK to complete the changes to your Page Setup. 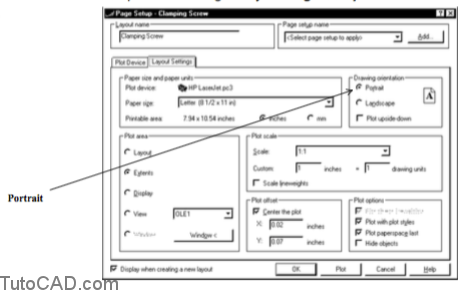 You will be learning about the other settings for Page Setup later on so do not worry if you do not understand these settings right now. 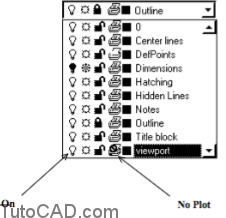 Step 20: Oops back the Erased objects. Preview the plot with Dimensions Thawed & On. Save your changes. 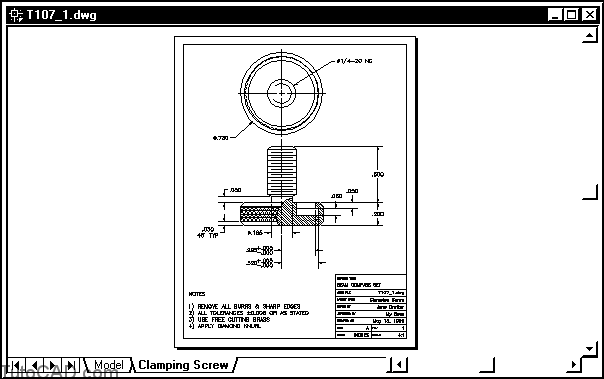 How to use Grips (Introduction)

How to manage Object Properties BYLAYER

How to use AutoCAD DesignCenter

How to use plot Styles

how to use Styles In Other Drawings

How to save and Restore Views in a drawing in AutoCAD

How to create & Use Layouts In Templates

How to modify HATCH Objects

How to use Drag & Drop Cut & Paste

How to use ZOOM Window command

How to use Zoom previous command

How to use Object Properties Manager

How to use Orthographic Views & Construction Lines