Section 1: Setting Up an AutoLISP Routine

In this section you will learn how to:

Typical Structure of a Routine

AutoLISP routines can become very complicated. Like any complex problem, it helps to “divide and conquer” in order to understand the steps that will be necessary for the solution. Considering one part at a time will help you figure out what else you need in other parts. It also helps you make sure you have covered all the issues that may come up.

Although AutoLISP routines can have many different structures, a typical one might be divided into five general parts:

We have already seen step 4, using the (command) function to execute AutoCAD commands. The next few sections will concentrate on how to get user input, prepare, and clean up. For most of the remainder of the class we will be discussing how to perform calculations. 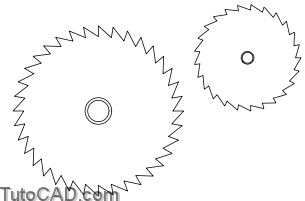 In a previous module we learned the function (getvar). This function “got” a system variable stored in AutoCAD. Frequently when writing an AutoLISP routine, you’ll want the user to provide information: the name of a layer, the endpoint of a line, the angle of rotation, the number of rows, etc. AutoLISP provides a means of requesting user input through the (getxxx) functions.

This function pauses for integer input and returns an integer value. The [prompt] here and throughout is optional, though recommended, information for the user. The prompt must be in string form.

This function pauses for real input and returns a real value.

This function pauses for string input and returns a string value.

The optional T disables the spacebar for use as the <enter> key, allowing use of spaces in a string. The T, which always has a value of T or non-nil, is most commonly used as the flag, but anything that has value can be used, such as a number.

This function pauses for point input and returns a point list of (x y z). The optional point-list is used as a basepoint for the “drag” line.

This function pauses for point input and returns a point list of (x y z). The point-list is not optional this time. It is used as basepoint for a “drag” rectangle similar to a zoom window.

This function pauses for real input and returns a real value. The user can enter a decimal number, or a number based on the current linear unit measurement setting, or can pick two points and the distance between those points will be returned. The optional [point-list] is used as basepoint for “drag” line requiring user to only enter the second point.

This function returns a real number in radians of an angle entered either by pointing or by typing a value. The optional [point-list] lets you include a point (usually a symbol that points back to information that gives you a point) that defines the first point of the angle.

Type in the following functions. Estimated time for completion: 5 minutes.

1. At the Command: prompt type in:
(setq NAME (getstring “Enter your name:”))

2. At the prompt, try to type your full name. What happens?

4. Now type in your full name.

5. At the Command: prompt, type the following and pick points or give numbers as prompted: 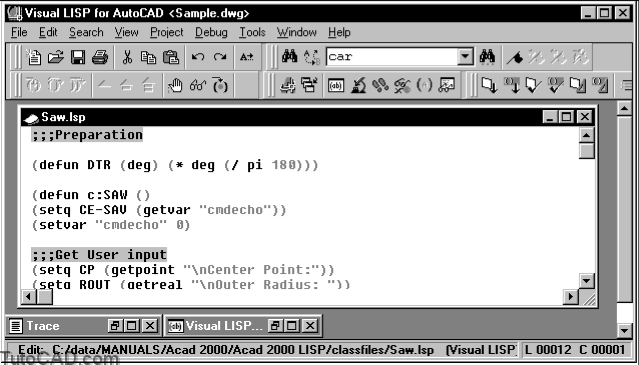 You will want to use an AutoLISP routine over and over again and not have to type it in at the Command line every time. An AutoLISP routine can be created in any text editor or word processor, and then saved as a file in ASCII text format.

One thing you will notice as soon as you load a file into the Visual LISP editor is the color coding. This helps to identify each type of data in a routine. 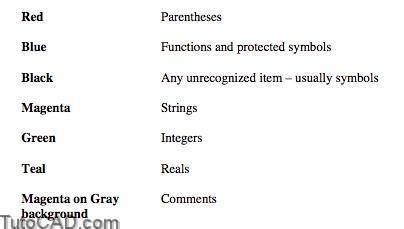 In this practice you will open an existing AutoLISP file and identify the different parts. Then, you will create an AutoLISP file that will ask for four unique points and will then construct a closed, four-sided polygon by drawing a line between each point. Estimated time for completion: 10 minutes.

1. Start the Visual LISP Editor and open the file SAW.LSP.

4. Start a new file in the Visual LISP editor and save it to the name BOX1.LSP. Using the (setq), (getpoint), and (command) functions, write up a routine that will request user input of four points and construct a line through each point to create a polygon.

Self Check:
Setting up an AutoLISP Routine

1. What are the five parts of a typical AutoLISP routine?

2. What function will allow the user to input a real value by picking two points?

3. What function will draw a dynamic “window” attached to the pointer?

4. What is the purpose of the optional basepoint in the (getpoint) function?