The Spline command creates SPLINE objects based on NURBS

While SPLINEs are useful for sketching free form curves by eye they can also model curves governed by mathematical equations.

For example, you could model the hanging cable illustrated below from only 3 points and the tangent information at each end.

As shapes become more complex you may require more points if you want the SPLINE to be an accurate shape.

For example, a SPLINE was generated below with a different point on the SPLINE for every day of the year. 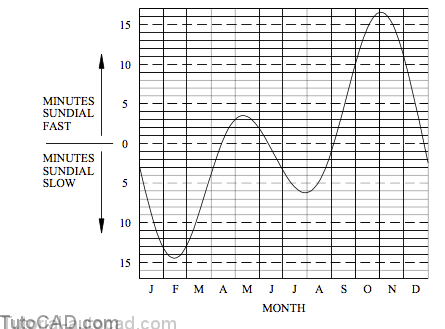 Supply SPLINE points in sequence & press <enter> at the prompt for the next point when you have supplied all of the points.

You can also use SPLINEs as the leader object in Qleader. 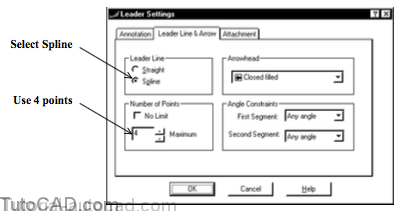 Leader SPLINEs can have any number of points but you will normally get good results using only 4 points. 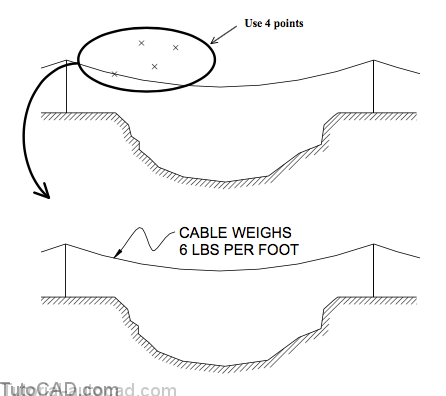 SPLINEs do not have to have separate start & end points and you can use the Close option for Spline to create a closed shape.

See also  How to create and use POINT 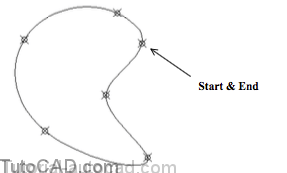 If the SPLINE should pass through all points (e.g. if you use an equation to generate points) then Fit tolerance could be zero

For example, the SPLINE below was created using the same points as the one shown above but with a Fit tolerance of 50 (instead of 0) 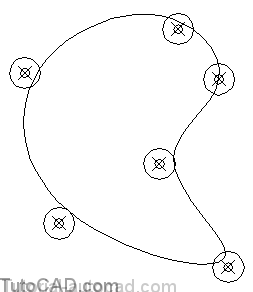 »1) Launch AutoCAD (if it is not already running). Close all open drawings (if there are drawings open).

»3) Pick Tools + Run Script. Select your personal folder to Look in and select T208.scr as the script File name. Then pick the Open button to run this script. This sets drafting tools to match the behavior described in the exercises.

»4) Left-click on OSNAP in the status bar to turn it On (if it is not already On).

»5) Pick Draw + Spline. Invoke a Node osnap shown below near P1 (on one of the red POINT objects) at the prompt for the first point. Then use Node osnaps at POINT objects near P2, P3, P4, P5 and P6 but do not terminate this command.

6) Right-click in the drawing area to invoke a shortcut and select Fit Tolerance. Press <enter> to use the default of 0 but do not complete the command yet.

7) Right-click in the drawing area to invoke another shortcut and select Close to use this option. 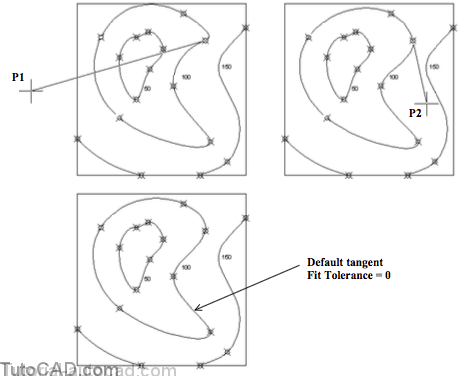 When Fit Tolerance is 0 the SPLINE passes through all points. 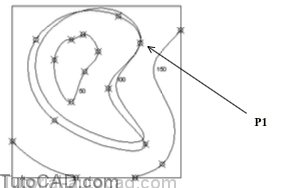 10) Turn the Tolerance layer On. 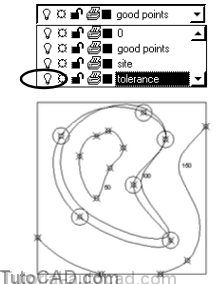 The shape of the new SPLINE is significantly different because now the SPLINE is allowed to deviate from each SPLINE point.

11) Save the changes to the current drawing then Close this file.

13) Pick Draw + Spline. Use Node osnaps near P1, P2 and P3 in that sequence then press <enter> to specify the tangents. Use the command line history shown below to complete the cable SPLINE.

14) Use Line to create a vertical LINE at the edge of the valley with an Endpoint osnap near P4. The other end of the new LINE can be any point above the dashed LINE.

15) Use Dist to find the horizontal distance (X) between the pole & this vertical LINE with Endpoint osnaps. The dimension below shows this distance to be 334.3772 inches.

» 17) Use Dist to find the cable sag at the vertical LINE with Intersection osnaps. The dimension illustrated below shows this distance to be 104.6181 (this differs from the Y value above by 1⁄2 percent).

You can now use inquiry commands (like Dist) to examine clearances at other points without having to make calculations.

19) Find the vertical clearance H at the other side of the valley.

20) What is the error for the cable sag at the same point (H) relative to the value found from the equation?

21) Pick Dimension + Leader & right-click in the drawing area to invoke a shortcut then pick Settings. 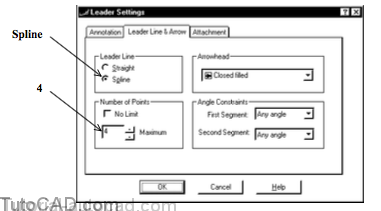 23) Press & hold <Shift> while you right-click in the drawing to invoke a shortcut and select the Nearest osnap. Then hold your crosshairs near P1 to invoke the Nearest marker and left-click to use this as the first point. 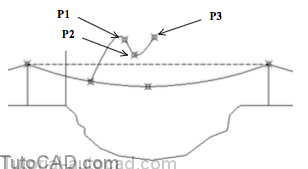 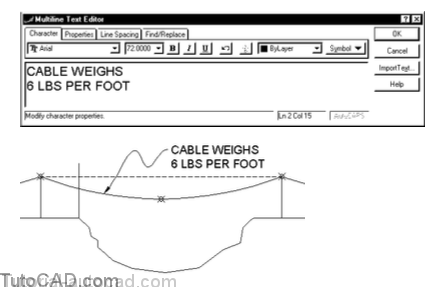 26) Save the changes to this drawing & Close the file.

Finding Drawings With Attributes In DesignCenter

How to use Overlay vs Attachment