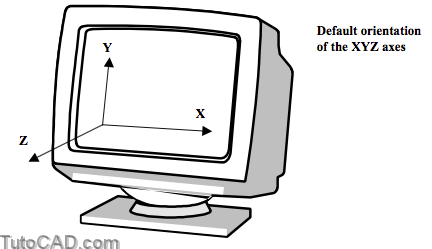 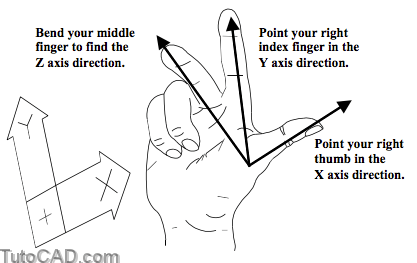 Drawing Planes And The UCS

If you do not include Z ordinates when you type coordinates for points, the supplied point is on the drawing plane of the current UCS.

For example, you could draw the 2 LINE objects in 3D as shown below using the command line history shown. 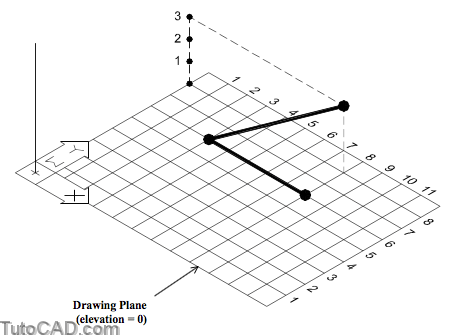 You can use the Elev command to change the elevation of the drawing plane relative to the XY plane of the current UCS.

You can also supply points in 3D using a cylindrical or spherical format for coordinates.

The format for relative cylindrical coordinates is @R<A,Z 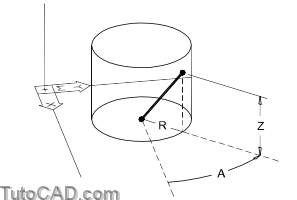 The format for spherical coordinates is @R<A<B 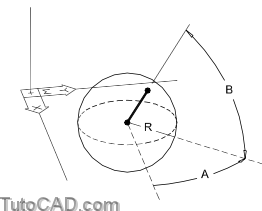 When you start New drawings from scratch you see theWorld Coordinate System (WCS) icon in the following orientation.

View From Below XY Plane

When you view models from underneath (e.g. the Bottom view) you see only the outline of the UCS icon and the appropriate labels.

View Parallel To The XY Plane

The UCSICON is a box with a broken pencil if you view your model in a direction parallel to the XY plane of the current UCS.

Displayed At The Origin

When the UCS icon is currently displayed at the origin point you will see a small cross inside the UCS icon at this point.

UCS Icons shown on the previous page (and the perspective icon shown above) are used in the 2D Wireframe setting of Shademode. 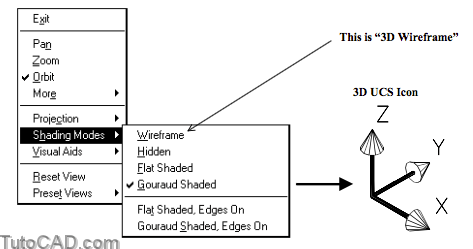 The UCS icon can clutter your screen and get in your way at times. 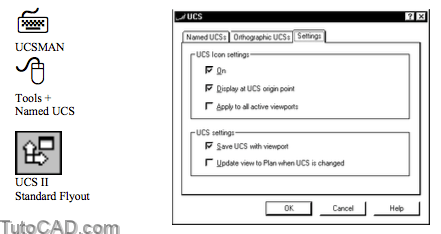 In the next exercise you will work with a model that has already been set up to use a UCS that is different than the WCS.

You can return from a UCS to the World Coordinate System(WCS) at any time by using the World option of the Ucs command. – you will use this command option in the next exercise.

» 1) Launch AutoCAD (if required). Pick File + Open and select the T303_1.dwg drawing file in your personal folder. Close all other drawings (if other drawings are open).

» 2) Pick Tools + Run Script. Select the T303.scr script file in your personal folder and pick the Open button there to run this script. This sets several system variables to match the behavior illustrated in this manual.

» 3) Pick Draw + Rectangle. Left-click on the OSNAP status bar button to turn it On. Invoke the Intersection tooltip shown below for the first corner and left-click to use this point. Then enter @36,84 for the other corner.

You just sketched the outline of a door using a 2D object (LWPOLYLINE) in this simple model of a house.

Your first corner point was a full 3D coordinate (X,Y & Z ordinates) because you used an osnap for this point.

»5) Right-click in the drawing area to invoke a shortcut and select Repeat Rectangle. Hold your crosshairs over the Endpoint marker shown below, without left-clicking, to acquire it as an alignment point when AutoCAD prompts for the first corner point.

6) Move your cursor to the right to invoke a 0 degree tooltip angle. Type 12 inches as the distance and press <enter> to supply this point as the first corner for the rectangle. 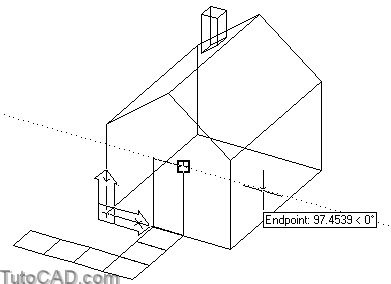 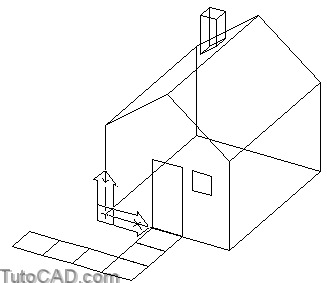 See also  UCSs In Multiple Viewports in a 3D drawing

8) Pick Modify + Mirror. Select the last rectangle as the objects to mirror then press <enter> to continue. Invoke the Intersection tooltip near P1 then left-click to use this as the first point of the mirror line. Move your crosshairs downward to invoke the 270 degree tooltip and left-click to use this for the second point of the mirror line. Press <enter> for <N> at the delete the source objects prompt 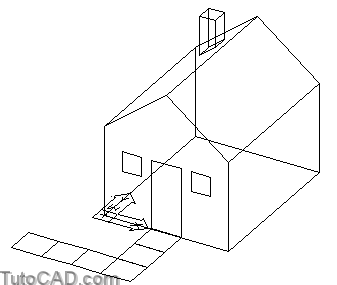 10) Pick Draw + Rectangle. Hold your crosshairs over Endpoint osnap shown below to acquire it (without left- clicking) as an alignment point for tracking. Move your crosshairs to the right to invoke a 0 degree tooltip angle. Type 50 then press <enter> to use this point as the first corner of the rectangle. 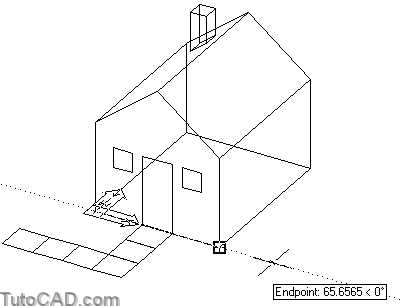 Now the drawing plane is parallel to the base of the house so this 2D rectangle is created in this plane as well. 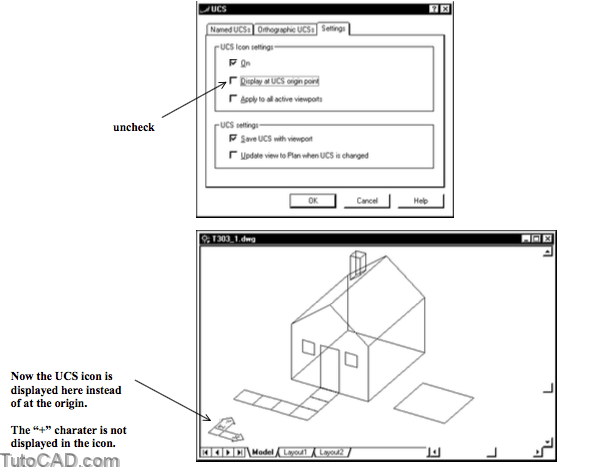 16) Pick Draw + Rectangle. Pick any point on screen as the first corner and observe the error message on the command line. Then press <Esc> to cancel this command.

Specify first corner point or [Chamfer/Elevation/Fillet/Thickness/Width]: You cannot point within a Perspective view. Change the Projection to Parallel from the 3D Orbit right-click menu.

» 18) Save the changes to this drawing and Close the file.

Orthographic UCSs in a 3D drawing

Getting Started In 3D

Orthographic UCSs in a 3D drawing